How businesses respond to the challenges of COVID 19 depends, in large part, upon the type of business and the extent to which cashflow levels are reduced by a downturn in trade or activity.  Inevitably, companies that are experiencing significant downturns in business often look at how they can sensibly reduce their overheads – often by cancelling early long-term service and supply contracts with sub-contractors which have become unaffordable.  Whilst the ‘business case’ for doing this might be overwhelming in terms of cashflow and expense management, being able to exit a contractual relationship early is a matter of law, dependent upon the terms of the particular contract and the circumstances that affect the ability of the each party to perform.

If the contract contains an express right to cancel early, perhaps after a short notice period, then exiting can be fairly straight forward as long as the notice requirements are strictly met.  However, often such contracts do not contain an express right to cancel before expiry of the agreed term, in which case a party wishing to cancel a contact early will need to find an alternative way to achieve that.

The phrase ‘force majeure’ is often used by a party seeking to exit a contact early where something has happened, which was unexpected or unplanned and which affects the cost of performing the contract by that party.  However, under English law there is no general principle of force majeure.  It only applies as justification for non-performance as per the wording of the particular force majeure clause in the contract (if there is such a clause).  Such clauses are not standardised and clients can be surprised to learn that their particular circumstances are not covered by the force majeure clause in the contact at all, or in the way they thought.

‘Frustration’ is another legal concept that parties can be quick to assert as justification for trying to terminate a contract early and avoid ongoing, unwanted, performance obligations.  Whilst frustration is a legal concept that applies generally under English law, it is much misunderstood by businessmen, in our experience.  Typically, where it has become more expensive or inconvenient for a party to continue to perform a contract frustration might be asserted to avoid such burdensome future performance, but just because a contract has become more costly for a party to perform than it expected or planned does not necessarily frustrate it!  Generally, it is difficulty to frustrate a contract, as the standard required to show that its ongoing performance has departed from that which was intended, is considerably high.

Of course, there are times when the force majeure clause will apply or where a legitimate frustration argument can be made out, or where early termination can be negotiated and agreed – or contract terms renegotiated to better suit one party.  In these times of COVID 19, legal advisers must be clear and precise when advising a client on early contract termination to avoid the client being sued for wrongful termination, whilst also being agile and creative (where possible) to support the client’s need to curtail unaffordable overheads.  We have been successful recently negotiating early contract terminations for a range of clients, including in circumstances where there is no clear-cut right to cancel the contract early.

Often there is a way for a party to lawfully exit early an unwanted contract – whether by exercising properly a right to cancel, because circumstances have materially changed or as a result of commercial negotiation.  It is important though, that businesses intending to cancel contracts early take proper legal advice as the consequences of getting it wrong can be very costly; for instance, remaining liable to pay for services for the unexpired term of the contact.

If you would like to discuss exiting unwanted contracts early, or renegotiating terms with your counter-party, please contact Andrew Iyer on: +44 207 1773371, or by email to: [email protected] 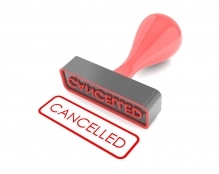