Home > 'Star Polaris': the 'nail in the coffin' for loss of profits claims against shipyards.

'Star Polaris': the 'nail in the coffin' for loss of profits claims against shipyards.

In the Star Polaris LLC v HHIC-Phil Inc [2016], a newbuild bulk carrier suffered serious engine failure 6 months after delivery, caused by breaches of the yard’s quality obligations under the shipbuilding contract.  The yard accepted responsibility for repair costs and related expenditure, but did not accept liability for loss of income suffered by the ship owner during the repair period whilst the vessel was out of service.  The ship owner also claimed that the value of the vessel had diminished due to the yard’s failures.

The yard relied upon an exclusion clause in the shipbuilding contract that excluded its liability for “consequential or special losses, damages or expenses” which, it argued, included any loss of profits claim and damages for diminution of value, howsoever arising.

The ship owner argued that the use of ‘consequential or special’ when describing the excluded loss resulted in only losses which fell within Limb 2 of the well-established rule in Hadley v Baxendale being excluded by the clause; ie only indirect losses which did not arise directly and naturally in the ordinarily course of events.  As the losses of profits/diminution in value were the direct result of the yard’s breach of contract the ship owner argued, they were recoverable as falling outside the scope of the exclusion clause.

No doubt the ship owner expected the court to follow the usual narrow English law approach when construing an exclusion clause and was mindful of the general line of authority (coming from exclusion clauses in the main BIMCO offshore vessel contracts, for instance) that supports the argument that the use of just the expression ‘consequential’ when excluding loss is intended to equate to indirect loss under Limb 2.

Both the Arbitration Tribunal and, on Appeal, the High Court agreed with the yard’s construction of the exclusion clause. The Judge (Mr Justice Cooke) decided:

•    That the exclusion clause was part of a “complete code” in a shipbuilding contract which allocated liability for defects in the vessel between the yard and the ship owner and was not, therefore, an exclusion clause in the usual sense.
•    That the use of the term “consequential” was not intended to equate to the rule in Hadley v Baxendale or to limit the operation of the clause to indirect loss and damage only.  Instead, it was intended to exclude in a “cause and effect” way any financial loss resulting from the defects and the repair of the vessel, whether direct or indirect.
•    That both a loss of profits claim and a claim for diminution in the value of the ship fell within ‘consequential’ and were therefore allocated to the ship owner by the clause.

Whilst the decision of the High Court adds certainty to the interpretation of a regularly used exclusion clause in most shipbuilding contracts, it does mean that ship owners will in most cases be unable to recover loss of profits from defaulting yards.  This decision should not alter a yard’s repair obligations under a guarantee clause but ship owners should expect to have to rely on loss of hire and earnings insurance to recompense profits lost as a result of a vessel being out of service due to defects and during repairs.

If you would like more information about this case and legal development, please contract Andrew Iyer at: [email protected] or on +44 (0)207 1007714.

For more information about IY LEGAL and the legal services we can provide, please visit:  www.iylegal.com 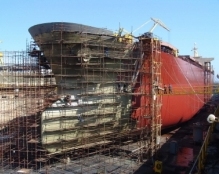