'Subject to Contract' & 'Subject to Board Approval'; what does that mean?

When negotiating a contract of almost any nature, it is well established under English law that to do so ‘subject to contract’ means that at no stage of the negotiations does a binding contract or terms come into effect between the parties in law or equity, unless and until the intended formal contract is executed, and that each party may withdraw from the negotiations before that point, even if terms are actually agreed in principle between the parties.  That approach was recently confirmed by the Commercial Court in the ‘Palladium’ case [2018 EWHC 1056 (Comm)].

As the Judge explained: "When a person concludes an agreement on behalf of a company which is stated to be subject to its board approval, he makes clear that he does not have authority, or at any rate is not prepared, to commit the company unless and until the approval is given.  Since the directors are required to exercise an independent judgment whether the transaction is in the best interests of the company, it is very hard to see how there could in such circumstances be any implied promise binding the company to the effect that approval will be forthcoming or that it is a mere formality or a “rubber stamping” exercise. Even an express promise would be problematical. If the negotiator makes clear that he is not authorised to commit the company, he can hardly be authorised to commit the board of directors to commit the company. Accordingly, when an agreement is concluded which is subject to board approval, neither party is bound until the approval is given”.

We are often asked to advise clients if a contract has come into existence or not, particularly concerning the sale and purchase of a commodity, or the fixture of a vessel to perform a voyage.  Typically, the parties will have agreed all, or almost all, of the necessary terms in correspondence but have not actually signed a drawn-up contract or agreement.  One party claims there is a binding contract, the other that there is not.

In those situations, a binding contract might have come into effect depending upon the nature and extent of what exactly it can be demonstrated on the facts has been agreed between the parties.  However, if the exchanges are clearly marked ‘subject to contract’ or ‘subject to board approval’ almost certainly no binding contract will come into existence before a written contract is executed or the required board approval is provided.

Where a party wishes to avoid ‘accidentally’ entering into a contract or binding obligations during negotiations, it is well advised to qualify discussions, offers and acceptances with either phrase, as appropriate.

If you would like more information on how best to protect yourself when negotiating a contract, please contact Andrew Iyer on: +44 207 1007714, or by email to: andrew@iylegal.com. 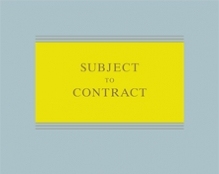