Home > When is a damaged vessel a 'Constructive Total Loss'; the RENOS decision.

When is a damaged vessel a 'Constructive Total Loss'; the RENOS decision.

In the recent RENOS case [2018 EWCA Civ 230], the Court of Appeal has provided helpful clarification regarding the calculation of total loss of a vessel when an Owner seeks to abandon the vessel as a constructive total loss (or a 'CTL').

Under the Marine Insurance Act 1906, an Owner wishing to abandon a badly damaged CTL vessel to underwriters can do so in certain circumstances, in which case the loss is treated as an actual total loss rather than a partial loss.  A vessel can usually be treated as a CTL where the costs of repair would exceed the repaired value of the vessel; hence the importance of what costs can be taken into account when assessing the overall costs of repairing the vessel?  This issue can be highly relevant where a vessel is badly damaged but not lost; simply put, is she worth repairing or should she be regarded as a CTL? Often underwrites and the Owner disagree!

Prior to the Court of Appeal’s decision (which has upheld the first instance decision of Mr Justice Knowles), insurers of vessels were usually able to proceed on the basis that the costs of recovering or repairing a damaged vessel incurred prior to a notice of abandonment (required by the MIA 1906) were not to be taken into account when assessing if the vessel was rightly a CTL.  This suited underwriters by reducing overall repair costs and, therefore, the likelihood of a vessel being a CTL.  The Court of Appeal has now decided that costs of recovery and/or repair incurred before the Owner tenders a notice of abandonment are to be taken into account when assessing if the vessel is a CTL – effectively reversing the approach that is usually taken by insurers.

The Court of Appeal also decided that SCOPIC costs fall to be included as costs incurred when assessing if the vessel is a CTL – again, which was not previously the approach usually taken.

The RENOS might be appealed to the Supreme Court.  If not, or if it is and the decision of the Court of Appeal is upheld, this new approach should make it harder for underwriters to defend claims that a badly damaged vessel has been properly abandoned as a CTL.

If you would like more information on this legal development or on any aspect of shipping law, please contact Andrew Iyer on: +44 207 1007714, or by email to: [email protected] 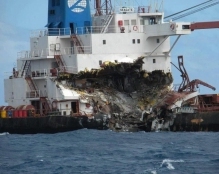